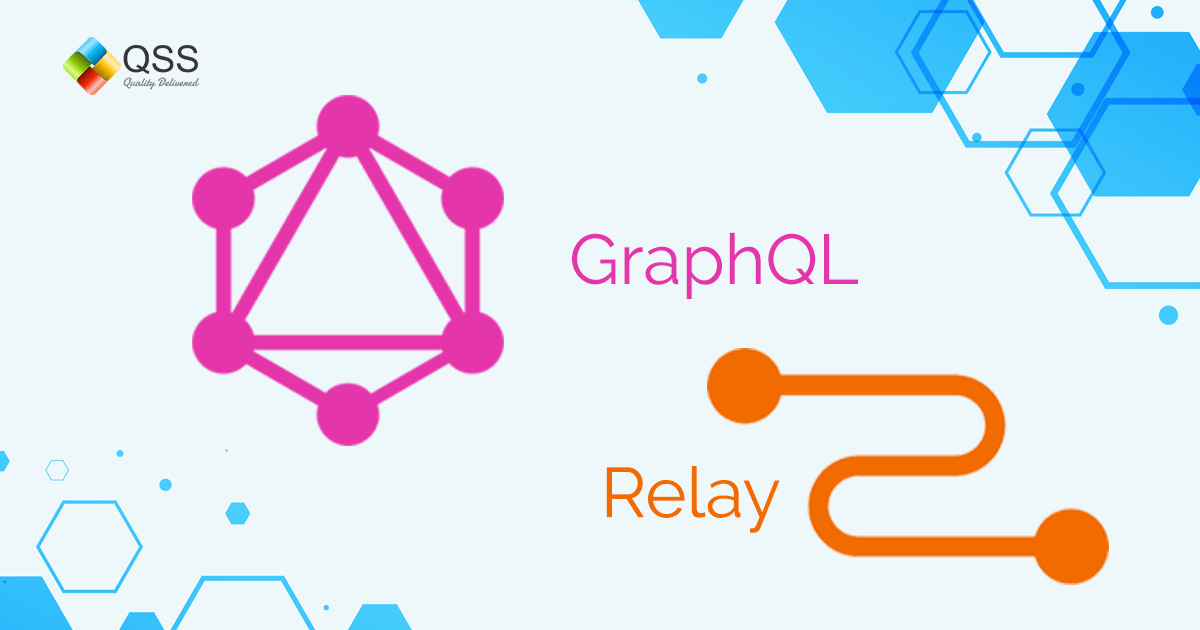 Getting Started with GraphQL and Relay

This article is targeted towards the audience who want to do more than just handle UI on a networking application and want to handle data fetching and manipulation. Though there are many clients to handle data fetching, Apollo and Relay are amongst the most used and famous libraries when coupled with Graphql. Here, in this article, we’ll discuss the basic functionality and properties of Relay and it’s compatibility with Graphql. It is my suggestion that you should first have a basic understanding of GraphQL.

Have you ever thought about the situation in which you want only limited things or data but you get a bunch of them and only a few are useful. For example Rest API, Its endpoint returns a fixed data structure, so the client usually always under or over fetched information.

This is where Graphql Comes to rescue as it gives clients the power to ask for exactly what they want and nothing more.

When building a react application, Relay couples React with the help of GraphQL and develop the idea of encapsulation. It allows components to specify what data they need and relay provide that data to the component. Relay is inspired by the flux in some manners. Instead of multiple stores, it has one central store that caches all store data.

GraphQL is a query language for your API, based on Graph algorithm. It provides an understandable description of the data in your API. It is developed by Facebook in 2012 and open-sourced in 2015. GraphQL allows developers to define types of Data. For Example:

And now the response you will get

It gives clients the power to ask for exactly what they want and nothing more, what you can see in the above example. GraphQL is not tied with any specific database or storage engine.

Since this article is towards the compatibility of Relay with GraphQL, I would not get into too many details that how GraphQL works on the server. 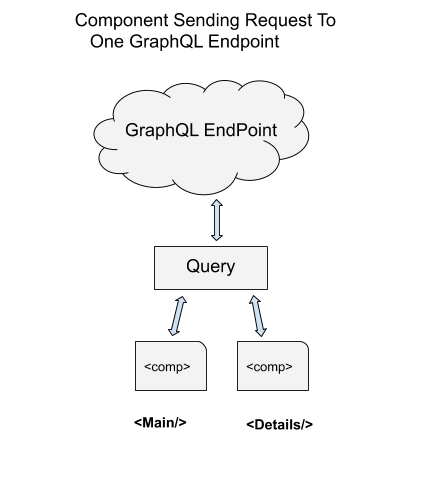 Relay is a JavaScript framework which is used for building a data-driven react application. Data-driven, what it represents? For understanding purpose, data-driven is a model where you can control the flow of the program by offering different data set where the program logic is some generic form of flow or State changes. 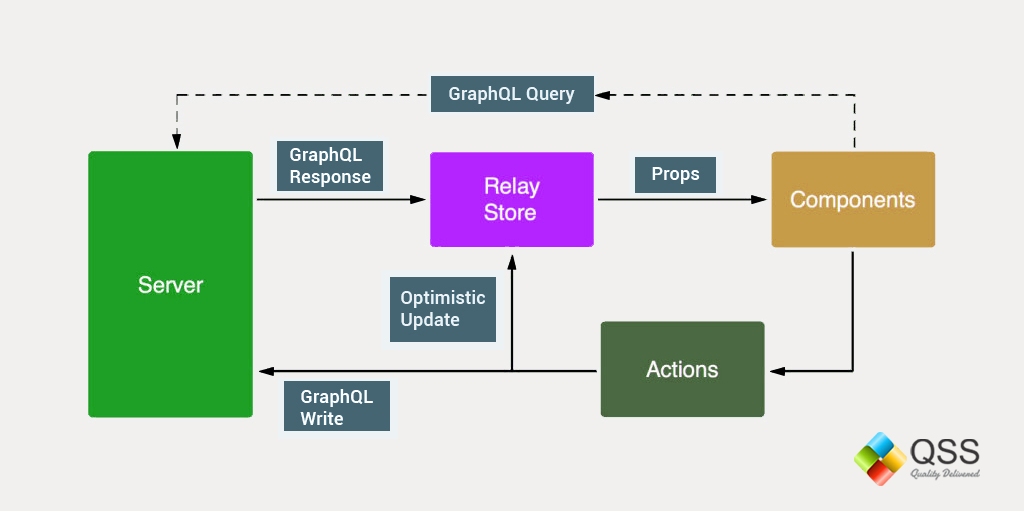 Use GraphQL On The Client

Here are real discussion will start. For a very basic understanding, you can suppose GraphQL client is a code that sends the post request to GraphQL server. There are many ways by which you can use GraphQL on clients.

What are these clients, why we are using them? Is it not appropriate if we use plain HTTP to fetch data each time and iterate through all data until we get the right one?  Well, I hope you know better than me about this. If GraphQL provides you a way to abstract away a lot of manual work you’d usually have to do during that process and lets you focus on your real important work in your app.

Let’s consider some infrastructure feature that everyone probably wants in their app:

Apollo Client and Relay are two famous clients for GraphQL and we are going to discuss the compatibility of Relay with GraphQL.

Use yarn and npm for install React and Relay

add relay into list of plugins your .babelrc file

*Note: Relay plugin should have run before another plugin to ensure that graphql template literals are completely transformed.

With some additional configurations, it can translate Relay Classic.  This plugin has some additional options like compact and schema, these options can be used for further customization for different environments. For Example:

You have also an alternative option, instead of using babel-plugin-relay, you can use Relay with babel-plugin-macros. After installing it add it into your babel config.

Relay also require Relay compiler which you can install by executing below commands:

This installs a bin script relay-compiler into your node module. After edit your application file just run the relay script to generate new compiled artifacts.

Or you have also an alternative where you can pass watch option which can look for changes into your file and automatically re-generate compiled artifacts. For that, you have to install watchman.

Now what’s left for you is set up relay environment and write GraphQL query.

For environment setup, we have to bundle together configuration, network-handling and cache storage that relay needs in order to operate. Well, Relay environments need at least store and a network layer. The above code uses the default implementation of the store and creates a network layer using a simple fetch query.

Now, we finished the relay environment setup so we can start fetching queries and rendering data on the screen.

Here we will discuss some methods and properties provided by Relay.

If you remember we discussed earlier GraphQL that how to write a query in GraphQL. Let’s start with how a query can be executed?

You have to pass query and variable into Query Renderer component provided by react-relay. You can pass a simple query or query with a variable. For Example:

We are using graphql for define query and pass environment, query, and variables to fetch data.  graphql is a template tag that is never executed at run time but used by relay compiler to generate the runtime artifacts that relay required to operate.

We can also mutate data using mutation tag. Like QueryRenderer for mutation, commit Mutation is used in Relay.

Containers are a higher-order component, it checks if the data is available and updates the component when the data has been updated.

Fragments, it allows composing component to queries. It is used by a container to define its own data requirement by creating a fragment list.

It is also a higher-order component, similar to a Fragment Container, which is designed to simplify the workflow of loading more items in a list in many cases, we don’t want to fetch all the data at once but want to lazily load more data. It depends on a GraphQL server exposing connections in a standardized way.

It is a class that has two static methods that are used to dispatching a mutation to the remote server, similar to calling an “Action” in Redux.

Relay employs a client-side cache, which means whenever a mutation is sent to the server, Relay needs to know the way to update the cache with the mutation query result. Hence it is necessary to add mutation types for the getConfigs array.

Those types can be:

Routes are normal objects that are used to declare root queries. The relay will combine the defined queries with fragments by using Relay. Renderer and send them to a remote server to fetch data.

The relay sends mutation to the server and update component after receiving a response. It updates the local state directly after receiving a response, but it is not optimistic approach. We can configure mutation to do an optimistic update. It means immediately updating our local data with what we expect it to be if we get a successful response from the server, updating the data immediately assuming that the mutation request will succeed. If it does not succeed, we can roll-back our update. For Example:

Relay uses Relay compiler to convert graphql literals into a generated file that remains alongside with your source file. It generates code as a part of build step which can be referenced at runtime, just because of this Relay’s runtime is not responsible for generating query strings and various optimization can be performed that could be expensive at runtime. If you need something unique you can build your own version of the compiler by swapping your own FileWriter and AstCache.

Relay uses a directive for adding additional information to graphql documents, which uses by Relay compiler to generate appropriate runtime artifacts. It only appears into your application code and removed when request sent to graphql server. @arguments, @ relay, @connection these are some directives.

Now I am going to conclude and I appreciate you that you have come so far to learn or understand Relay. After reading all the above content if you still think why we use Relay at all? If GraphQL does so much and works outside of Relay. Why do we need it? Well, the answer is GraphQL is not perfect on its own, it lacks the ability to poll and reactively update and some of its built-in inefficiencies make the system less optimum.

Relay, on the other hand, fixes many issues of it. Data caching, allow existing data to be reused instead of forcing new fetch to increase the efficiency. Part of this boost effectiveness comes from aggregation and colocation of queries into a single. Another huge benefit is its optimistic update, pagination, network traffic reduction, and pure volumetric reduction.

Optimistic updates, which is an interesting methodology for client mutations, allowing the user to interact with the changes they had done and simulated their experience without waiting for the server to complete the process.

Let’s wrap up, Overall point is that GraphQL needs Client, GraphQL cannot be perfect on its own. If you want to use GraphQL then you have many choices to pick one of the clients according to your requirement.

About Author:
Saurabh Singh is a Full-stack developer currently working with QSS Technosoft. He has completed his bachelor’s degree in Computer Science and Engineering. He is always ready to explore new technologies

About QSS:
QSS Technosoft is a top-notch ReactJS Development Company based in India & USA. The company offers the best React development services for building highly interactive cross-platform mobile apps at a lightning-fast speed.

Focusing on your success by creating most user-friendly web & mobile apps, the company feels proud mentioning its large base of happy clients from across the globe. Contact us for your React development requirements filling the form below.