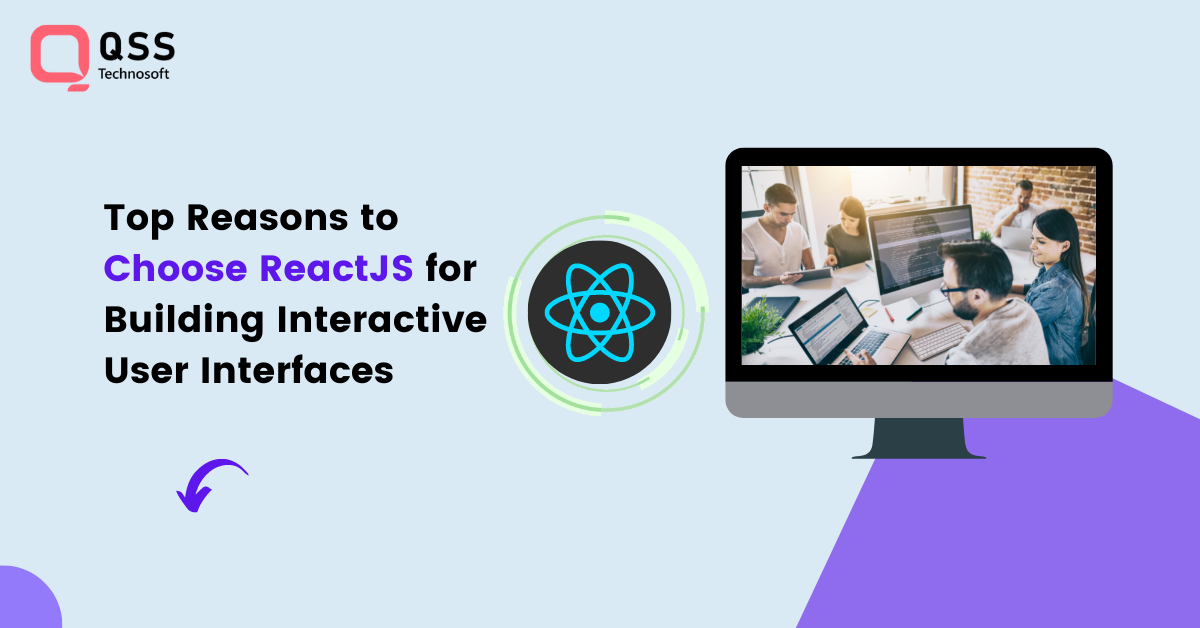 React is one of the most popular JavaScript frontend libraries available. It has enabled developers to create interactive user interfaces in real-time.

Although it’s pretty lightweight, React enables you to focus on the bigger picture by working with components instead of the DOM elements when developing your web application.

Here are some more reasons why you should consider using React when creating an app:

Virtual DOM gives better control over how data will be rendered and manipulated to skip unnecessary checks or updates. By default, the UI updates itself automatically whenever changes occur in data models. But if there are no changes in underlying data structures, there is no need to update the same. ReactJS will only re-render when necessary, making app updates smoother and faster.

React is easy to learn

React was developed keeping in mind that any developer who knows HTML and JavaScript should work on it. This makes using React relatively easy for web developers across all domains. Also, since Facebook has open-sourced its library, developers can use various third-party tools for React development.

The best thing about having to render functions inside JSX tags is that it helps give a visual representation of the UI without loading the whole DOM structure into memory which helps improve performance by limiting rendering time considerably. Using JSX also supports features like dynamic styles, animations, and HTML templates inside components.

Optimized for mobile apps too

React can target both desktops as well as mobile platforms. This helps developers save time by not designing two separate user interfaces. The library helps reduce development time with its reusable components feature that allows developers to create specific components once and use them across your app wherever required.

It works with other libraries very well

Developers can work seamlessly with other libraries like Backbone, AngularJS, or Underscore.js without worrying about compatibility issues. In addition, react is easy to integrate with other JS frameworks because of its non-invasive nature and low footprint.

React helps enforce consistent styling across your application’s user interface by using reusable components that can be plugged into any page. As a result, you end up saving a lot of development time by not customizing components for specific sections on a webpage.

This also allows developers to update centralized code instead of making modifications across different areas of the web app, which can lead to errors if some updates are missed.

When using React, you tend to write less code since it uses one-way data binding, automatically updating the view whenever a change occurs in the underlying model. In addition, since ReactJS has a relatively smaller footprint than other frontend JS frameworks, updating the UI becomes faster and smoother even when large amounts of data are involved.

It’s great for debugging too

Because React is based on JavaScript only, errors can be detected more rapidly. Apart from that, React also offers simple representations of how components work within the app so that problems can easily be identified without digging deep into elements. Using ESLint and JSX syntax enables developers to detect potential errors before deploying them into a production environment.

React provides a built-in event system that makes it easier for developers to attach behavior or interaction with elements. You can also create callback functions that are called when certain events occur.

Virtual DOM is an in-memory representation of the actual DOM structure, which helps improve performance by only updating the components that have been altered instead of doing it for all child nodes. React will calculate changes made to Virtual DOM and then apply those changes to real DOM, making app updates faster.

It’s excellent for testing too

Testing becomes easy since React has its own set of pretty comprehensive unit tests. If any modifications are needed, you can use the Jest test framework to test your React components.

React is very simple, and developers can quickly get started with it within a short period without having too much prior knowledge of other JS frameworks such as Angular or Ember. Even if you’re not using JSX syntax, learning how React works wouldn’t take too much effort since the main concepts are pretty straightforward and familiar.

Uses one language for app development

There is no need to learn additional languages like Dart and CoffeeScript with React JavaScript library, which would take more time and require separate toolsets. Learning how to work with React matters since the same language is used throughout the application lifecycle, from building user interfaces to testing and debugging.

JavaScript can’t be used on the server-side so React offers an API for spawning React components into a virtual DOM and returning them as HTML, which works very well with Node.js.

Compared to other popular JS frameworks, this is probably the only one that offers server-side rendering capabilities without any significant issues or performance hiccups. That said, it’s typically not recommended to use React for large renderings since there are better alternatives available right now, like Angular 2, which uses Ahead of Time compilation for fast initialization times.

React was built to support offline application caching since every component gets its unique identifier making it easier to track all changes and update the application as relevant. Offline support is something that other popular frameworks lack, so if you’re using React JS library, this shouldn’t be an issue to worry about.

Flux is a pattern that Facebook recommends for building scalable client-side web applications, making it easier to maintain state using stores and rendering views without having too many extraneous details involved. Several open-source projects are available right now that use Flux concepts, such as Redux, which developers have used from PayPal, Yahoo, etc.

React is the latest JavaScript UI library that emerged to take the web development industry by storm. It’s fast, easy to learn, and can be used with various other technologies, including Node.js, to build native mobile apps using React Native.

With this framework around, it becomes pretty easy to develop single-page applications (SPA) which offer better performance than traditional websites. Even though there are plenty of benefits of using React JS development, many developers are still hesitant in picking it up due to a lack of support for large-scale apps or complex features needed in enterprise-level projects.

If you’re just getting started with the React JS library, check out some real-time examples on GitHub or follow the top tutorials available right now that can ease your learning curve. Nevertheless, React JS development has helped countless companies and start-ups develop next-generation web, mobile, and desktop applications.